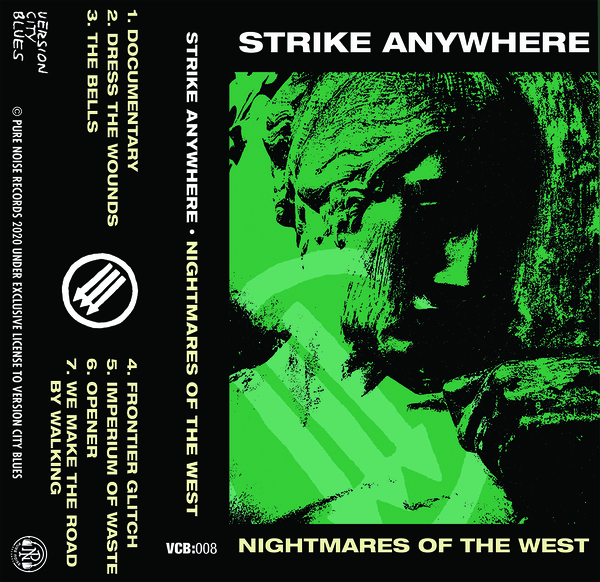 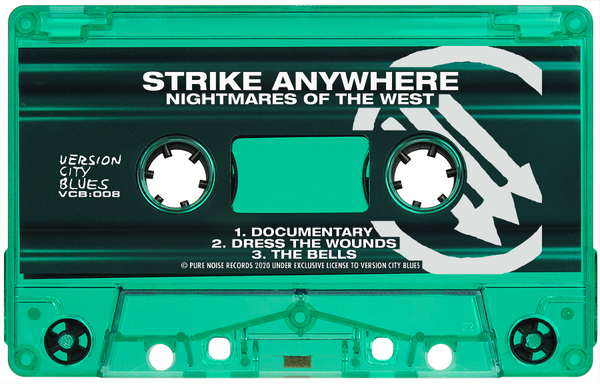 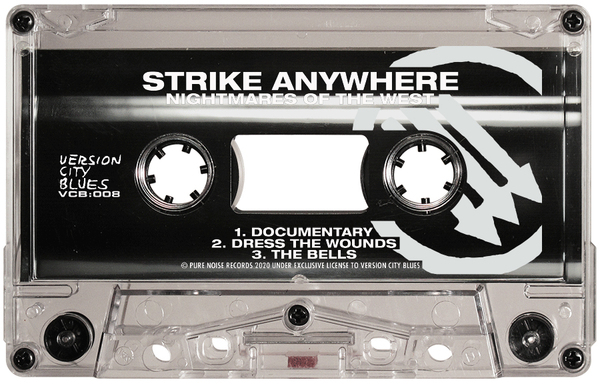 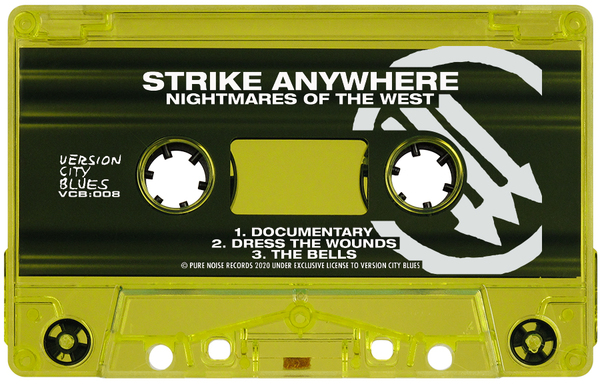 Nightmares Of The West might be Strike Anywhere’s first new music in over a decade, but in some ways the five-piece hasn’t changed at all. These seven songs – six brand new originals and a cover of “Opener” by London punks Blocko – are as full of fire and fury as anything the band has written since forming in Richmond, VA in 1999. At the same time, this EP infuses the band’s ideological vision with the perspective its members have now, both as people in general, but also as political activists and musicians currently living in the USA – somewhere that’s markedly different from how it was when Iron Front, their last album, was released in 2009.

“We wanted to write things that we felt really fresh about and that revealed something new,” explains vocalist Thomas Barnett. “It was almost like this refresh, this restart, where we found ways to write songs that not only moved us, but also reflected the times and our ages. But we definitely feel inspired, and this record is a platform for us to hopefully – in time – play shows, connect with community, and help keep those little fires lit in ourselves and in others through the music and those shared experiences. These songs are the conversations that we want to have and the feelings that we still really need to share.”

The seeds of those conversations and feelings were properly planted in 2017 in Brooklyn, when the band – completed by guitarists/backing vocalists Matt Smith and Mark Miller, bassist Garth Petrie and drummer Eric Kane – were on a bill with Hot Water Music. Because although there’s been no new music for a decade, Strike Anywhere still played the odd shows and still sent ideas to each other from their respective towns and would work on them when they were together. That night, it was “The Bells”, a song about retreading your past that specifically explores the ghosts of their hometown of Richmond.
“That night, we brought out the bones of that song,” says Barnett, “and just started playing it, like rapid fire around the room with Eric kind of playing his drum sticks on his lap, and we just started getting into it. And then we had this conversation that has a lot of chemistry and smiles, and we were talking about the songs like they were actually living and breathing.”

While there’s certainly a sense of heartfelt, poignant personal nostalgia ringing throughout “The Bells” at all the things and people that have been lost over the years – it is, of course, also underpinned by the political outlook and ideologies that have driven the band from their inception. So – like most songs the band have written over the years – while it’s specific in setting and inspiration, it’s universal in meaning, in message and in emotion.

“It’s about Richmond, our hometown, and a walk through the city i took after a good friend of mine died in a fire,” Barnett explains. “In the past 10 years since Iron Front, there’s also been a lot of loss, because obviously that’s what happens you get older – you lose friends and peers. So tucked into the record is that idea that of mourning and grieving, but knowing you don’t have to go it alone. But this song also deals with the loss and grief of non-human things – cities, time. Things that used to have a lot of depth and felt really robust, and now feel flattened by gentrification, flattened by raw capitalism squeezing out art spaces, squeezing out working class communities. It’s looking at the way cities change and who you lose, and where people have to go when they can no longer afford to live anywhere.”

That balance – at a crude level, between the political and the personal, though really it’s something much more nuanced than that – is found within the fabric of the rest of the EP’s songs, too. Recorded, like the band’s four albums to date, at Salad Days Studio in Baltimore by Brian McTernan, it starts with the blistering “Documentary” – another song riddled with an overwhelming sense of loss, and contempt and disgust with what society has become – before crashing into the impetuous, breathless rush of “Dress The Wounds”. Elsewhere, “Frontier Glitch” is an aggressive yet melodic burst of defiance and pissed-offness that also contains the line from which this EP takes its powerful, provocative title – one that cements, if there were any doubt, the purpose and the meaning driving these songs.

“It’s speaking to what’s happening now, obviously,” says Barnett. “This system, this machine, this view of history has deep, fatal flaws. And it’s not just something for people to talk about academically, or, you know, in little groups, like this is something that is writ large now, when it hasn’t been in our lifetimes. And the critical failures of the view of America that the view of capitalism equating with freedom, the view of nation states, all this stuff that’s past its sell-by date, itself, like these ideas, that were flawed to begin with, and nobody was honest about it. And now, unprepared as fuck, here we are, and we really need to say ‘Okay, look, we can reorganize this. This thing happened 200 years ago, or the western hegemony of the globe happened 400 years ago and these were deep missteps. And we can either annihilate ourselves by trying to justify it to death, or – to quote the Bouncing Souls – we can find what’s good and make it last.”

That, then, is exactly what Strike Anywhere are doing with these songs. But more than that, they’re also turning the negatives in positives. For while there might be a sad tenderness at the heart of “Imperium Of Waste”, out of it springs a hope and an optimism that transcends and overpowers the emotions experiences that inspired it. Similarly, the Blocko cover pays tribute to that band’s drummer, Marc ‘Mates’ Maitland, who took his life in 2019 – a way of keeping his memory alive while acknowledging how time keeps moving on for all of us – and always will. To that, extent, the point of Nightmares Of The West is to understand that, and to understand that despite of all the injustice in the world, it’s still important to fight the good fight, to find solace in friendship and community, in order to heal on both a micro and a macro level. That’s something encapsulated by final track, “We Make The Road By Walking”, the sentiments of which embody the EP’s overall attitude – that no matter what has happened, and no matter what might and will happen, we have to always continue walking forward towards something better, as well as strive to be better ourselves .

“This has to be about healing,” says Barnett. “It has to be about looking deep and understanding that we’re all still in this together. And this shit is getting harder. And it’s a lot of the same stuff that bands have been talking about, that people have been protesting and laying down their lives for. It’s not even about having all the answers, but finding that strength is really important. It’s really important to stay in the game and to feel love, and to feel like your family – and everyone and everything around you – is worth fighting for. That’s all this band has been trying to say for 20 years and counting, but it’s the project of a lifetime.”

Hit it when the lights are gone.